Home/Food for Thought, In the News, Viewpoints/Death & Taxes
Previous Next

You have probably heard the following saying which is generally attributed to Benjamin Franklin. He wrote:

“But in this world nothing can be said to be certain, except death and taxes”

Today, it seems, the rich and powerful are scheming to avoid both! 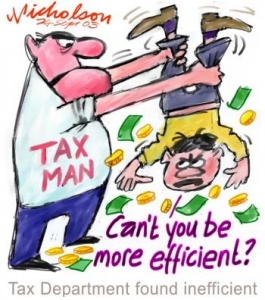 Recently, the UK news media have been preoccupied with exposing some of the schemes used by powerful corporations and wealthy individuals to avoid paying tax.

Changes brought in at the recent UK ‘Budget’ will attempt to address this problem (including the so-called “Google-tax”), but judging from past experience they will  only have limited success. At best, these schemes are of dubious morality, and at worst may border on the illegal.

The sad part is that, because some organisations and people avoid paying their share, the burden then falls on those who are much less able to afford it.

So, in the light of Franklin’s observation, although it seems that many of the rich and powerful think taxes are avoidable, surely death is inescapable? Another recent news item reported that fifteen teams of medical and scientific experts have taken up the challenge of a “Longevity Prize”, which is being funded by the billionaires of Silicon Valley.

The basic premise behind the challenge is that it may be possible to solve ageing and to get people to live healthy lives, more or less indefinitely.

So, biotechnology companies have started work on the development of age-defying drugs, with one pioneer in the field claiming that such drugs will lead to the biggest industry that has ever existed.

Ironically, in the unlikely event that progress is made in reversing the curse on Adam that the Bible describes (“you will surely die” Genesis 2:17 NIV), the only ones likely to be able to afford these super drugs are the rich and powerful!!

Envy and doubts creep in…

If that happens and age-defying drugs are developed for those who can afford them, the rest of us might start to think in the same way as the Psalmist did when he wrote:

“For I envied the arrogant when I saw the prosperity of the wicked. They have no struggles; their bodies are healthy and strong… From their callous hearts comes iniquity; their evil imaginations have no limits… This is what the wicked are like – always free of care, they go on amassing wealth” (Psalm 73.3–12 NIV).

The Psalmist saw the prosperity and apparent ease of the wicked and began to question the wisdom of his commitment to following the ways of God:

“Surely in vain I have kept my heart pure… All day long I have been afflicted, and every morning brings new punishments” (Psalm 72:13–14 NIV).

If we ever start to feel the same way, the Psalmist also provides the answer to our doubts:

“When I tried to understand all this, it troubled me deeply till I entered the sanctuary of God; then I understood their final destiny” (Psalm 72:16–17 NIV).

In another Psalm, the present prosperity and final destiny of the wicked are made very clear:

“I have seen a wicked and ruthless man flourishing like a luxuriant native tree, but he soon passed away and was no more; though I looked for him, he could not be found” (Psalm 37.35–36 NIV).

In contrast the Psalmist invites us to:

“Consider the blameless, observe the upright; a future awaits those who seek peace” (Psalm 37:37 NIV).

The Psalmist was not alone in being troubled by the prosperity and success of the wicked. The prophet Habakkuk pleaded with God to end the injustices that prevailed in the Kingdom of Judah of his days, thousands of years ago.

“How long, LORD, must I call for help, but you do not listen?… Why do you tolerate wrongdoing? … the law is paralysed, and justice never prevails. The wicked hem in the righteous, so that justice is perverted” (Habakkuk 1:2–4 NIV)

And the answer Habakkuk received is just as relevant to us:

“For the revelation awaits an appointed time… Though it linger, wait for it; it will certainly come” (Habakkuk 2:3 NIV)

There is an appointed time when all injustice will be put right. This fact is sure and certain, because it’s based on the promises made by God.

So the Bible’s advice is, patiently endure the injustices of the present and just keep striving to do the will of God. Then, at the appointed time, God has said that those who are faithful now will benefit from his promise and enjoy the blessings he plans to bring to this troubled world.  They will be in that Kingdom that God will establish, that will replace everything we know now, when even death itself will have finally been “swallowed up in victory” (1 Corinthians 15:54 NIV).

LIGHT ON A NEW WORLD

Bible-based magazine published 4 times each year and FREE to download from this site.

Who are the Christadelphians?

We are a small religious group that has tried to get back to the faith and character of the early Christian church in New Testament times. This involves a return to Biblical doctrines and practices as taught by Jesus and his apostles.

What does the name mean?

It comes from two Greek words, 'christos' (Christ) and 'adelphos' (brother), and thus means 'brothers in Christ'.
Jesus describes his followers as his brothers:
"So Jesus is not ashamed to call them brothers" (Matthew 23:8, Hebrews 2:11-12)

Where are they found?

We have members in all continents of the world. Like the Christians of the first century we meet in homes, rented rooms and, in some cases, our own halls.

We try to follow Christ and his apostles in both belief and practice, as taught in the Bible. However, in the second century some Christians began to tamper with the original faith. The result is that in at least some aspects of teaching and practice every Christian group now differs radically from the original beliefs and practices.
By having our own name we can de distinguished from the vast mass of 'Christianity'.

For more information write to:

We hope that visitors to this site will benefit from the following:

- REASONS to believe in a God who created this world and is involved with the things we see happening now
- FACTS about the Bible and its content that prove its inspired by God, reliable and that its worth reading
- REVIEWS of 'original Christianity' and how it may differ from the beliefs and actions of some people today
- TOOLS to help anyone wanting to understand the Bible and to become a Christian themselves.

"Salvation is only found through Jesus Christ; in all the world there is no one else whom God has given who can save us." (Acts 4:12)

Something you need to know…

2000 years ago, Christians were a small minority sect "everywhere spoken against" (Acts 28:24). Today, Christianity has won respectability, but at a heavy price. Many of the essential beliefs of those early Christians have been lost and new ideas introduced. As a result, some people now feel that Christianity has 'lost its way'.

This website is produced by the Christadelphians (a name which means 'brothers in Christ'), who have tried to return to the beliefs and practices of the early Christians.

If you would like to know more about the Bible, what it really says, and about the faith and beliefs of the first Christians, please explore this site, or write to the address you will find on these pages.